Update on Xinjiang Riots – Criminal Trials to Begin in August 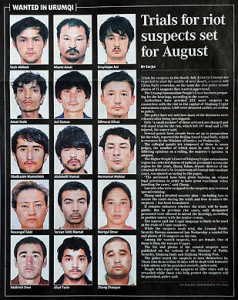 The China Daily reported on Friday that trials of a “small number” of the people involved in the July 5 Xinjiang riots will begin by the middle of August.  With over 1,600 people detained, what is considered a “small number” remains unclear.

Also unclear is what number of the people tried will be of Uighur background.  Given that violence in the region appeared to be spurred by both Uighur and Han, some of the “small number” should include Han Chinese.  But in a recently issued “most wanted” list relating to the July 5 riots, 14 out of the 15 people are Uighur.

(1)    Public trials can ease foreign criticism. The international press, including papers in the U.S., Europe and the Middle East, followed the Xinjiang riots closely and will be publicizing the verdicts of the trials.  But if the trials remain closed, the press is left with nothing but rumors from inside the courtroom.  Rumors are what started the riots in the first place (see previous post).

Additionally, authorities in Urumqi, Xinjiang’s capital, have taken extra care to train court personnel who will be working on the trials and have provided specially trained lawyers to the defendants.  Assuming that the training efforts have been undertaken to provide a fair trial to defendants, this could be an opportunity for China to show publicly the development of their criminal justice system.  And while there will likely still be foreign criticism of the proceedings (see all the criticism by the U.S. media regarding the criminal trial of Amanda Knox in Italy), such criticism will be based upon fact and not on mere speculation.

As the Olympics showed, China can certainly put on a phenomenal show (if not the best Olympic show ever).  However, part of being a world power is to be constantly on display; China cannot confine international focus to only its most glamorous moments.  Rather, as a global leader, the world will be watching how China makes it through its more difficult episodes.