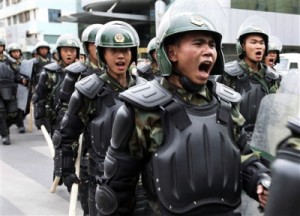 In discussing the recent riots in Xinjiang, yesterday’s post focused on who the Uighurs are and what initially caused the riots in Xinjiang’s capital, Urumqi.  But there is more to the riots than a single incident of violence that occurred thousands of miles away.  In Part II of “Xinjiang Riots – A Primer,” we examine the underlying tensions between the Uighurs and the Han that have been brewing for years as well as explore the rumors that started all of this violence.

What are the underlying tensions between the Uighurs and the Han?

While the violence perpetrated by both the Uighurs and the Han is equally condemnable and nothing can justify it, the fact that such violence can escalate so rapidly over rumors circulating from a town thousands of miles away makes one wonder why.   To understand the tensions that run just below the surface in Xinjiang, it is essential to examine the Chinese government’s policy toward the province during the past 10 to 15.  In an effort to modernize and economically develop Xinjiang, the Chinese government has encouraged companies and people to “Go West” and move to the predominantly Uighur province.  While Uighurs have inevitably benefited in many ways from this economic development, the Chinese government has its own interest in developing Xinjiang.  Xinjiang province is rich in natural resources including oil and natural gas, both of which are necessary to fuel China’s rapidly growing economy.

In encouraging Han Chinese to develop Xinjiang, the population of the region has been radically altered.  In 1949, only 6% of the population was ethnically Han; today, 40% is Han Chinese.  Additionally, most of the good paying jobs are taken by the Han Chinese, leaving the Uighurs with an unequal share in the economic development.  The Uighurs also have little to no political power.  In country where the government is synonymous with the Communist Party (CCP), the only way to play a role in government is to be a member of the Party.  However, according to the U.S. Department of State, Party rules still forbid members from professing a religion and requiring expulsion of members who belong to a religious organization.  This rule makes it almost impossible for Uighurs to become members of the CCP and thus have an impact on the way Xinjiang is governed.   Furthermore, since 2002, the Chinese government began to phase out the use of Uighur in schools (including the elementary level) and universities in Xinjiang.  As a result, the Uighurs are left economically and politically impotent while their language is being stamped out, creating the foundations of an easily explosive situation.

How could incidents of mass violence start from mere rumors?

What is also interesting about the current Xinjiang situation is that both incidents – the one in Shaoguan and the one in Urumqi – were started through rumors, rumors that the press and authorities denied but yet were still able to take hold. In Shaoguan the police and the press both stated that the alleged rapes did not occur.  But instead, the Han Chinese believed rumors that the rapes did happen and acted in response.  The Uighurs in Urumqi believed that more than two Uighurs were killed in Shaoguan, even if the press and the police both confirmed only two people killed, sparking the July 5 protest and the eventual riots.  Evidently, the Uighurs and the Han Chinese are united in their mistrust of state authorities and question the veracity of the information supplied by both the police and the government-controlled media.  In an era of instant communication, where news can get to people within a matter of seconds, this mistrust in the reliability of government information and the media is a very dangerous situation for the Chinese government.  Where the people are more inclined to not just believe rumors, but to act on them, the Chinese government might be wise to reevaluate its current control of the media.

One Response to “Xinjiang Riots: A Primer – Part II”